Social Media – A Boon or a Bane 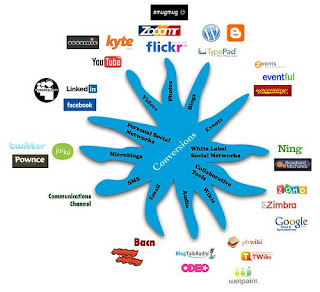 Are you on Facebook, twitter? Oh I forgot and how about LinkedIn? Well these are some typical questions which we get to hear these days. When we meet someone, before taking their contact we usually ask them for their e-mail id’s and well it’s assumed that they would be on one of these social networking sites or may be on all of them. Hmm interesting indeed. Isn’t it? Commonly known as the Web 2.0, these sites are not just a rage amongst the youngsters but it’s surprising to see how people from all walks of life are taking fancy to social media tools.

Interestingly enough, while for some, these remain to be a mere tool or a means to connect with friends, for many it is an extension of their personality. Parallels can also be drawn how enterprises use these social media tools – while some imbibe the ethos of customer driven marketing, for others it fails to feature or qualify as an integral part of their IMC programme.

Social media is considered to be an offspring of promotion mix. The advent of social media on the internet has made it possible for a person to communicate about his products & the company that provides the same to a mass of people. It helps the companies to talk to their consumers directly thereby unlocking the secrets of consumer perception and buying behaviour. At the same time it enables the customers to talk directly to one another. But this lies in contrast to the integrated marketing communications epitome whereby a high degree of control is present unlike in social media marketing where there is no control over the frequency and content of conversation amongst the consumers. Thus the managers need to keep the vision and mission of their company in mind and evolve the consumer discussion around it.

Social media tools are not just used for marketing but companies are making a judicious use of this tool for recruiting people as well. According to a survey it is observed that 45% of employers use Facebook/twitter to screen job candidates. Recruiters feel that hiring people through Twitter, Facebook, LinkedIn is a lot easier than doing the same through job boards etc. If there is a vacancy in a company, it simply tweets about it and the job is done! Within a few days only one would be able 2 decide upon the candidate.

It’s surprising to see how much we are dependent on these sites from Hiring people, marketing products to communicating our views to the world outside, having discussions, making reservations for dining, and the list goes on. The latest here would be to address complaints to the Delhi Traffic Police on facebook (http://bit.ly/bI3Amn)! With internet enabled portable devices, information is available on the move and it makes it easier to be connected from anywhere.

On one hand, the Web 2.O sites have proved to be very useful for people from all walks of life but at the same time I (and many others) believe that they are making people less emotionally attached to each other. I’m sure most of you who are reading this post will agree. Isn’t that true that back in time we used so much use of the landlines, then came the cell phones and now internet through cell phones. In this fast moving life, no one’s got the time to spare on the phone but surprisingly enough people tend to connect through facebook, twitter, orkut etc. Isn’t that making you less emotionally attached to your peers? Don’t you think instead of writing on your friend’s wall on facebook, it’s a good idea to call them up? It does not really take much of an effort though. Do you expect birthday calls anymore right at 12am, or do you just open up facebook and other such sites to see the whole list of wishes? I guess the latter would be true in most of the cases for this generation. Then how do you think these sites are doing any good to you when you can’t even feel that bond with your near and dear ones?

Succinctly put, although Web 2.O sites have been a very effective tool of communication, it has made a lasting (read negative) impact on our lifestyles. It has given rise to a new cult which is here to stay! Think about it, most of us have the time to tweet, but make no efforts to meet?