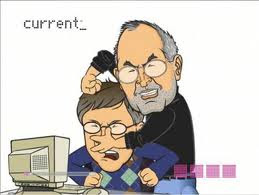 A $300 million advertising campaign was created for Microsoft by ad agency Crispin Porter + Bogusky (CPB) named “I’m a PC”. This campaign was designed to challenge the Apple’s “Get a Mac” campaign which showed the PC as boring, clunky and stereotype when compared to the cool and intuitive Mac. This campaign by Microsoft had a huge impact on people and eventually there was a tremendous sales growth as compared to the Apple’s sales.

Stage 1: Apple’s “Get a Mac” campaign

The “Get a Mac” campaign was created for Apple by the company’s advertising agency TBWA\Media Arts Lab. The campaign became an instant hit because all the series of the ads had a white background with two men, one of which were dressed in casual clothes and introduced himself as Mac (“hello I’m a Mac”) while the other man in formal suit and tie introduces himself as Windows (“And I’m a PC”). The two of them compare the capabilities and attributes of Mac and PC. The PC is portrayed as a formal, polite, stuff, overly concerned with work and frustrated with the more laid back Mac’s abilities.

Apple’s ‘Get a Mac’ campaign is over after one of the most long-lived advertising runs of all time. The campaign which began in the year 2006 was replaced by the Apple’s website with a new “why you’ll love a Mac” campaign, which asks consumers, “Why get a new PC and just upgrade your computer, when you can get a Mac and upgrade your entire computer experience?”

The “Get a Mac” campaign obviously forced Microsoft to challenge the campaign and there it was with a $300 million campaign!

The “I’m a PC” campaign first began in September 2008. As discussed above, it was designed to challenge the Apple’s campaign. The campaign was created by CPB advertising agency and featured that normal PC users are found everywhere. The 60-second ad features more than 25 different people as PCs compared with Apple's one in all its TV spots. The intent was to demonstrate how PC users are ordinary people. Microsoft proved that people buy products that they see advertised and it increases awareness and they build an emotional connect with the brand or the product.

As soon as the Microsoft “I’m a PC” ad started airing, the Apple’s ad “Get a Mac” just disappeared. Microsoft’s sales were touching the sky as Windows PC was much cheaper than the Mac and also the “Windows. Life without walls” marketing made the people go crazy about the PC. Even netbook sales went up, giving additional uplift to Windows laptop sales.

Unfortunately this campaign faced some serious criticism. It was found that Microsoft's "I'm a PC" advertising campaign was created on a Mac and the celebrity speaker brought in by the software giant were all professed Apple fans. Also the four still images of the campaign posted at Microsoft's press site contained digital fingerprints from Adobe Photoshop being run on Apple computers.

To the above criticism, Microsoft issued a statement saying that almost all campaign workflow, agencies and production houses use a wide variety of software and hardware to create, edit and distribute content, including both Macs and PCs.

Posted by Ancita Satija at 7:03 AM