Assessment of the Marketing strategy of Micromax Mobile 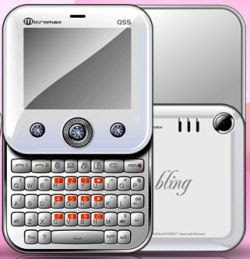 Micromax Q55 is a phone which was launched to target the female population only. The Micromax Q55 Bling is a dual-SIM (GSM + GSM) phone. The key features of Q55(bling) include its Clamshell type of looks, full QWERTY keypad, SWAROVSKI embossed keys, mirror at the back side of the phone. In addition, the phone also offers Opera Mini, Multi-Messenger, Stereo FM Radio, Facebook, Bluetooth and Music Player thereby making it feature rich. The design and make of the Micromax Q55 Bling phone makes it a good buy for those who want a mix of both beauty and brains.

Micromax launched its Q55 IIFA limited edition handset at the IIFA award function on June 5, 2010 in Sri Lanka. Priced at INR, 5,500 the phone was made available only for a month (from the date of launch) and came loaded with IIFA content including videos of the previous IIFA editions. Micromax joint hands with Dialoge, Sri Lanka’s largest mobile telecommunication service provider to provide customers with a Dialoge sim with every purchase.

The dream of the company was to have a phone chiefly targeted at women and make it feature rich to make it a popular hit within the female community. The big picture was to integrate beauty and technology in one handset. The purpose (in theory) behind launching this phone was to carve out a niche for this product and develop a cult. The method through which it tried to achieve the purpose was through the commercial advertisement featuring Twinkle Khanna.

Having understood the product and the dream in the paragraphs above, below is a critical review of how Micromax failed to keep to the envisaged growth trajectory. Although the phone was embedded with the social networking site facebook but it was never promoted well through facebook and other social networking sites. The Micromax Q55 has groups on facebook which have not been created by the company itself and have miniscule number of fans endorsing the product and the company. Same goes for YouTube; the videos have not been uploaded by the company itself and it’s hard to trace more than just a handful of these videos. Further, Micromax also failed to launch a Twitter handle to communicate with the online audience and form a connect. The only way in which the phone managed to create awareness and buzz in the audience was through the commercial advertisement which featured Twinkle Khanna and the tag line of the phone was “Q55 Bling, it twinkles.” Lastly, the phone is available only in white colour, which leaves the girls with a limited choice. In essence, the company could have created a cult for this handset but failed to do so as it wasn’t promoted very well.

If I were given the chance of being the Head of Corporate Communications at Micromax, I would undertake the following activities to make the gadget a roaring success:

· Introduce a range of funky colours for the phone than just white.

· Social media applications are no more a choice for any handset provider – while facebook is essential, the company will also aim to integrate other similar social media platforms in the phone.

Posted by Ancita Satija at 9:47 AM