July 27th 2015 was indeed a sad day for India! The day which started with terrorist attacks 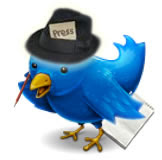 in Punjab early morning followed by the demise of Former president and Bharat Ratna, Dr APJ Abdul Kalam, left most of us in pain and shock!

With the advent of social media, the way we consume news has evolved over time. While I was constantly checking my Twitter feed around both these events, I stumbled upon a Tweet by ‘PressTrust of India’ (PTI), India’s premier news agency which has been functioning since 1949 and it currently commands 90% of new agency market share in India.

To my surprise, the tone of the Tweet by PTI was really disrespectful. The use of words by one of the biggest news agencies in India definitely made me think if social media is taken seriously by the new/media agencies in the country. Instead of a blunt statement, PTI could have utilized 140 characters to share the message in a proper tone giving some respect to the former president of the country. 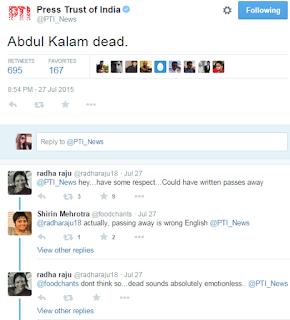 Within minutes, there were 695 RT’s, 167 Favorites and over 100 conversations around the tone of the Tweet. It was disheartening to see PTI not responding to any of the Tweets proactively. Although, the following Tweets did address him properly. 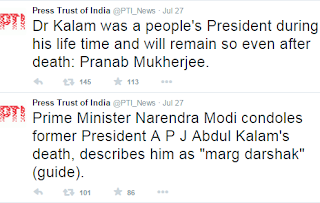 Here’s a snapshot of the same news posted on their Facebook page. While one can’t edit a Tweet on Twitter...however, the same could have been edited by PTI on Facebook. But the news agency did not bother to do so.

With social media:
●     News channels/publications/wires are running the rat race to deliver the news “First”
●     Not sure if there is a designated Editor or a process designed through which the news is uploaded on the social platforms of the publication/channel/wire. At least in this case, it doesn’t seem that PTI has an Editor to look at the content going on Twitter on a regular basis

With print media:
●     No matter how big the news is, it gets published the following morning in the papers
●     There is a designated editor for every publication
●     Editorial consent is a must before stories are published in the papers which leaves hardly an room for factual errors or tone of the message

While it is important to be factually correct, it is absolutely necessary to keep in mind how the message has been delivered to the audience.

News is consumed at a lighting speed on social networks and given that every media outlet wants to share the news first, doesn’t qualify for compromising on the tone of the message.

Interestingly, when I observed the Twitter profile of @PTI_news , I also noticed that while they have over 500 K followers, they haven’t taken the time out to follow anyone! According to their website, PTI employs more than 400 journalists and 500 stringers to cover almost every district and small town in India. In my opinion, if a company understands social media and takes it as one of an important means of communication, it would at least follow it’s own employees who are key to their success and growth. This also shows they understand the medium well and are not sharing news on Twitter just because the competitors will!

What do you think? Should sharing news on social networks by the media outlets be given equal importance as much as it is give to the print stories?