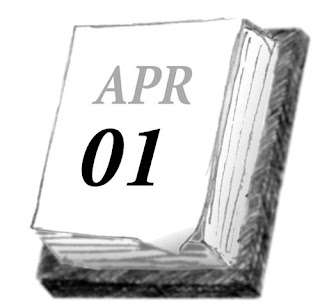 The first of April, some do say,
Is set apart for All Fools' Day.
But why the people call it so,
Nor I, nor they themselves do know.
But on this day are people sent
On purpose for pure merriment.
--Poor Robin's Almanac (1790)

Have you ever considered why there is an April Fool’s day? Who originated it? When did it begin? Why is it observed every year? Great set of questions! I wondered about this myself & found it quite interesting to research. As I discovered in my search, everyone has a theory but few agree on how the tradition arose. I'll try to get as close to the truth as possible.

April Fool's day is also known as the "All Fool's Day". Some see it as a celebration related to the change of seasons while others see it as an adoption of a new calendar. Since the ancient times, numerous festivals used to be celebrated such as the "Saturnalia" which became one of the most popular Roman festivals. It was marked by tomfoolery and reversal of social roles, in which slaves and masters ostensibly switched places. Further in India there was Holi, known as the festival of color, during which the people threw tinted powders at each other, until everyone was covered with the colors from head to toe. Such celebrations could have served as the precedents for April Fool's day.

Another explanation said that the April 1st was once celebrated as the New Year's day in France. But the Pope Gregory in 1582 declared the adoption of his Gregorian calendar to replace the Julian calendar. This was when the New Year’s Day shifted from the April 1st to January 1st! France was the first country in Europe to make this change and it took a while for the people in France to adapt to such a major change. This lead to a lot of people celebrating the New Year's on the April 1st and hence they were being called by the name of "April Fools". This harassment evolved over time into a tradition of prank-playing on the first day of April. Further, in some countries such as the UK, Australia & South Africa, the jokes last until noon only & those who played pranks after noon were being considered as the "April fool". So in this way the whole story originated and evolved and now every year people celebrate it as a tradition.

The tradition in the long run had spread to England and Scotland in the eighteenth century and was later introduced to the American colonies of both the English and French. In countries like Canada, France, Ireland, Italy, Japan, Russia, Netherlands, Brazil and the US, the jokes last all day! In Scotland the day is celebrated for good two days i.e. April 1st and April 2nd.The second day is devoted to pranks involving the posterior region of the body and is called the ‘Taily Day’. The origin of the "kick me" sign can be traced to this observance. In this way April Fool's day went international, specializing in its own brand of humour at the expense of their friends and families.

Some interesting search on the April fool's day includes the different and tantalizing "Prank days in the world and their traditional names" which are as follows:

· Iranians play jokes on each other on the 13th day of the Persian New Year (Norouz), which falls on April 1st or April 2nd. This day, celebrated as far back as 536 BC, is called Sizdah Bedar and is the oldest prank-tradition in the world still alive today; this fact has led many to believe that April Fools' Day has its origins in this tradition.

· In Poland, prima aprilis ("April 1" in Latin) is a day full of jokes; various hoaxes are prepared by people, media (which sometimes cooperate to make the information more credible) and even public institutions. Serious activities are usually avoided. This conviction is so strong that the anti-Turkish alliance with Leopold I signed on April 1, 1683, was backdated to March 31.

· In Scotland, April Fools' Day is traditionally called Hunt-the-Gowk Day ("gowk" is Scots for a cuckoo or a foolish person). Although this name has fallen into disuse, the traditional prank is to ask someone to deliver a sealed message requesting help of some sort – the message reads "Dinna laugh, dinna smile. Hunt the gowk another mile". The recipient upon reading it explains he can only help if he first contacts another person, and sends the victim to this person with an identical message, with the same result.

While people use unique pranks on this day, there are few thrilling ones from history that I came across while trying to unravel this unsolved history:

· Mark Bo-slough - The most famous physicist , wrote an article claiming that Alabama state legislature voted to change the value of the mathematical constant pi from 3.14159 to the 'Biblical value' of 3.0 . This was passed around via email and caused a shock amongst people. The scam was finally discovered when people started calling the Alabama legislature to protest. This prank was rated the Seventh in the "Top 100 April Fools Hoaxes of All Time" list!

· The French call April 1 Poisson d'Avril, or "April Fish". French children at times tape a picture of a fish on the back of their schoolmates, crying "Poisson d'Avril" when the prank is discovered.

· April Fool's Day in the Indian Media: In Bollywood there is a movie called the "April Fool" directed by Subodh Mukherjee starring Saira Bano.

To aptly summarize in few words, April Fool's day is "Just For fun" only . The pranks performed range from simple to elaborate but one must remain vigilant throughout the day for he/she may be the next April fool!